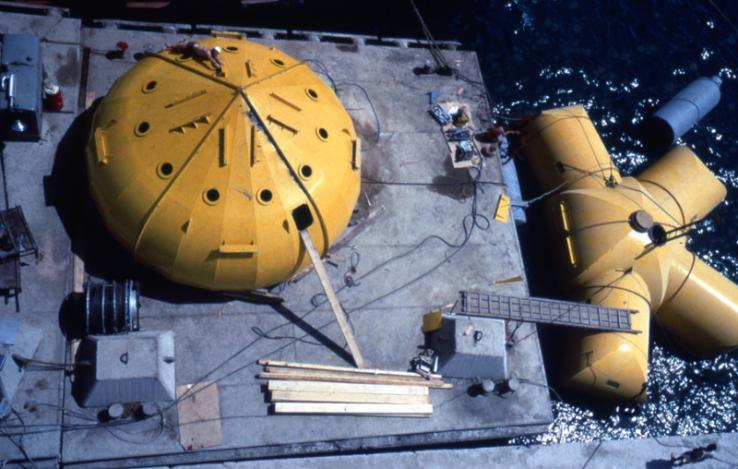 Can people live under the sea? If they can, for how long? A day, a week, a month? Captain Cousteau took these questions as a new challenge and launched his team into a mad adventure: building houses under the sea.

In 1962, Conshelf I was set up off Marseilles at ten meters depth. Two men, Albert Falco and Claude Wesly, were the first “oceanauts” to live underwater for a week. Christened Diogenes, this strange steel cylinder, 5 meters long and 2.5 meters in diameter, served as home and laboratory for its two inhabitants.

Despite its small size, Diogenes offered every comfort: television, radio, a library, and a bed. Observed from the surface by about thirty people, Falco and Wesly left each day to work underwater for five hours, studying interesting animals and building an underwater farm. Meanwhile, doctors monitored their health. Conshelf I was a success. The Cousteau team began preparing a more ambitious project.

the “Starfish”: The main house

It was 1963, and the first time humans had deployed such an operation under the water. Conshelf II was essentially a small village, built on the floor of the Red Sea at ten meters depth. The main house, the “Starfish”, stood next to an aquarium, a garage for the diving saucer and an equipment hangar. A deep station was installed 15 meters further down. Five oceanauts would live for a month in the Starfish base. Two of them would spend a week in the deep station. Again, the project was successful and Cousteau began talking about a third project.

In 1965, near Nice, France, the ultimate stage, Conshelf III, was born. One hundred meters below the surface, a building housed six oceanauts who would live together for three weeks. They would go out each day to work on a mockup oil well, an exercise to evaluate human capabilities.

Conshelf proved that human beings can live under the sea for long periods of time but that, even though they have the physical and psychological capabilities, humans are not made to exist in a world without sun. Nevertheless, these experiments gave rise to the training astronauts undergo today before leaving for a world of billions of suns: Space. Here, too, Cousteau was a precursor.